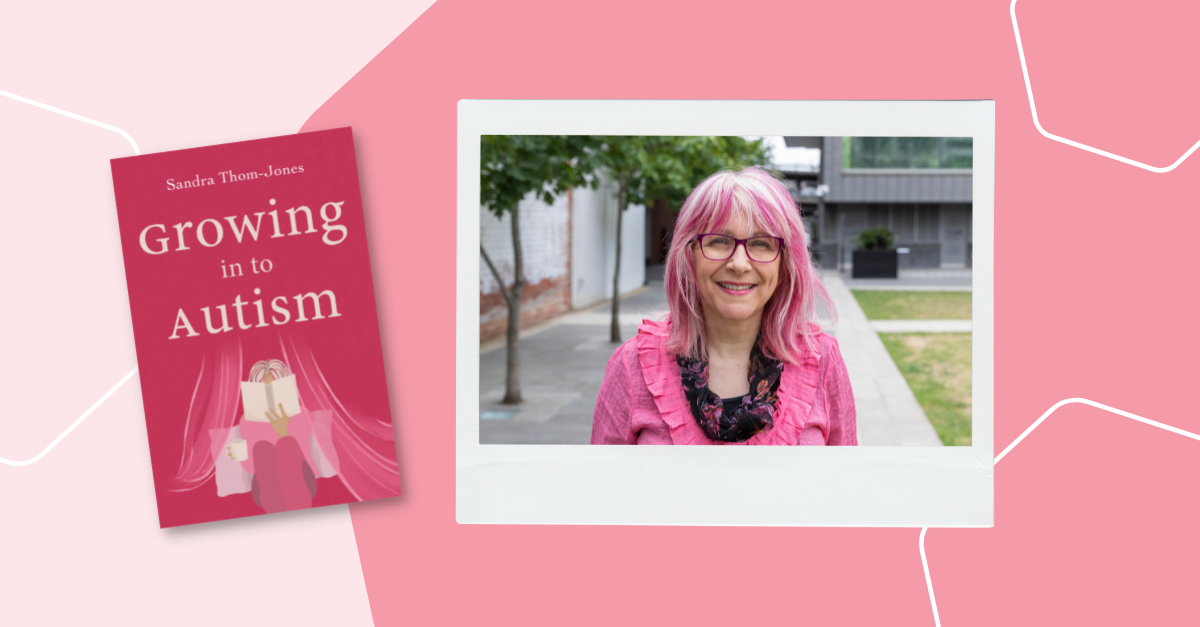 From the outside looking in, Sandra Thom-Jones was living a successful life: she had a great career, a beautiful home, a caring husband, two loving sons and supportive friends. But from the inside looking out, she was struggling to make sense of her place in the world, constantly feeling overwhelmed and exhausted, and convinced that her challenges with daily life just meant that she had to try harder. In Growing In to Autism, Thom-Jones tells the story of gradually realizing that she was autistic, and that she experienced the world in ways which were markedly different from neurotypical people.

Amaze spoke to Sandra about the themes that inspired the book, what she learnt about herself whilst writing the book, her relationship with masking and more.

What are some of the key themes in Growing in to Autism?

The aim of the book is to explain – using a combination of stories from my life and knowledge that I have gained as an autism researcher, advocate and parent – different characteristics and aspects of autism. If I had to boil it down to two key themes, the first would be that we need to stop seeing autistic people solely through the lens of our challenges and trying to ‘fix’ us so we fit in, and start seeing our strengths and valuing the meaningful contributions to society that come from our differences. The second, which is reflected in the title, is that we need to move away from the harmful myth that children grow out of autism; and replace it with the knowledge that, with the right supports, they can grow IN to their authentic autistic selves.

What’s one thing you hope people learn about autism from reading your book?

I hope that the book gives non-autistic readers some insight into what it is like to be an autistic person. I hope it encourages them to recognise the value in neurodiversity, to reach out to the autistic people in their life to find out how they would like to be supported, and to help them create a more inclusive world.

Conversely, what’s something you hope Autistic readers takeaway after reading your book?

I hope that the book helps autistic readers to understand their unique strengths and support needs as an autistic person (recognising that no two autistic people are the same, so there will be parts that resonate and parts that don’t). I hope it helps them to communicate their needs to the people around them and to advocate for the things they need to live theirlife.

Have you learnt anything about yourself through writing Growing in to Autism?

I thought that every single person experienced the world the way that I did. I thought everyone lived in a world where the lights were so bright, the noise was so loud, the clothes were so scratchy, the social rules were so confusing, the constant interaction was so exhausting. I assumed that the difference between me and them was that they managed it better. Learning that non-autistic people see, hear and feel the world so differently was mind-blowing for me!

What did you find the hardest to write about when writing your book?

There weren’t really specific chapters or sections that I found hard in the sense of a particular topic, but there were definitely aspects of the book that I struggled with.

Deciding on the structure of the book was difficult and I must’ve changed my mind dozens of times about the right structure. I wanted information to be easy to find and accessible to people with different levels of knowledge and experience of autism. However, working out the right order and structure for the topics was more complex than I anticipated. After much deliberation I finally settled on using the three categories of the DSM framework as the broad categorisation. I was concerned about doing it this way because I didn’t want to pathologise autism, or support a medical model that reduces autistic people to a series of “symptoms”. However, I thought that for many people, particularly those who are newly diagnosed or parents of people who are newly diagnosed and seeking to understand what it means to be autistic, this framework is probably where they start from because they walk out of the diagnostician with those categories and that framework.

Since diagnosis, how has your relationship with masking changed?

My relationship with masking has changed fundamentally since my diagnosis, although I would have to say that it is still evolving. Like so many autistic people I have been masking my entire life. Obviously, I did not call it that because I had no idea that’s what it was. I thought that’s what everybody did – or at least everybody who, like me, didn’t seamlessly move through life getting everything right. I thought everyone came home at the end of the day completely exhausted and unable to function. I thought everyone found social interaction confusing and draining.

Like many autistic people, there were multiple versions of me. The “work” me was very professional, serious, driven and apparently socially competent. The “social” me, albeit predominantly social in online groups that didn’t involve face-to-face contact, was obsessed with doll collecting, knitting, country music, and living in a world where everything was pink. The “at home with my family” me was somewhere in between the two of these but still felt the need to keep certain aspects of herself hidden even from her closest family members in case they realised just how damaged she was. The “alone in my room by myself” me sang, and stomped, and twirled, and stimmed, and talked to herself in funny voices.

And then the wheels fell off! I reached a point in my life where I was unhappy, agitated, confused, and felt like something fundamentally essential was missing from my life, but I had no idea what it was. I think I was pretty hard to live with during that time.  I know I was very emotional and unpredictable. I had many conversations with my husband where I tried to explain that I felt my life was passing me by and I was missing something fundamentally important, but I couldn’t work out what it was. It wasn’t until I started to realise that perhaps I, like both of my children, was autistic that it finally dawned on me that this “thing” that was missing from my life was me. I realised that I had spent so much time and energy masking who I was so that I could meet the expectations of other people that I had lost sight of who I actually was.

My diagnosis gave me the courage to stand up and advocate both for myself as an individual and more broadly for autistic people around me; and slowly, progressively, that gave me the confidence to begin taking my mask off. This was a gradual process, tiny steps at a time, each one anxiously anticipating how people may react. Little changes have made a huge difference to my energy and confidence levels: like being able to tell people that I need to have my camera off in zoom meetings in order to be able to process what they are saying, or explaining to my boss that I will be more productive if I can work from home, or wearing my sunglasses when I meet with colleagues in the far-too-bright cafeteria. Hopefully, they have also made it a little bit easier and safer for my autistic colleagues and students to take the same steps to make their day at work or study a little bit less exhausting. I would love to say that I bravely take my mask off at all times in all situations, but I’m not quite there yet.

There are probably a lot of adults who may be having the same thoughts and feelings you were when considering exploring an autism diagnosis. Do you have any advice for them?

For a long time I didn’t think I needed a formal diagnosis because I was at a stage in my life where I assumed it wouldn’t make much difference. My main reason for seeking a formal diagnosis was that I felt it would enable me to be a more effective autism advocate. I was anxious about the diagnostic process.  I wasn’t worried that I would be diagnosed autistic as I had self-identified that way for some time and was comfortable with it: I was worried that I would be diagnosed non-autistic. What if autism wasn’t the explanation for my difference and challenges, and I was just a flawed neurotypical?

I was not prepared for the emotional effect the diagnosis would have on me. It was an absolute life-changer, and the beginning of a journey into being comfortable with myself as a human being. Here was official confirmation that the challenges and problems I experienced weren’t a matter of not trying hard enough or not being good enough. I was different, not broken.

Professor Sandra Thom-Jones is an autistic woman, and the very proud mother of two autistic adult sons. She is an academic, author, artisan, and advocate for the inclusion of autistic people in all aspects of society. Her book Growing in to Autism (MUP, 2022) is out now.