Kay Kerr’s debut young adult novel Please Don’t Hug Me (Text Publishing) heralds the arrival of an exciting new #OwnVoices talent in Australian YA. The book is written as a series of letters from the perspective of 17-year-old Erin, as she tackles a series of bumps in the road to Schoolies: she’s fired from Surf Zone, her driving test is a disaster, and her brother just doesn’t seem to want to reply to her letters – oh yes, and she’s autistic. 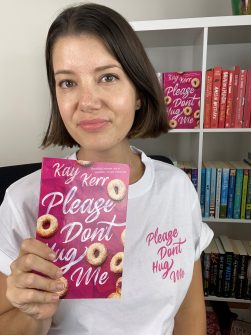 Erin is a delight to spend time with, and it’s clear that Kay’s own journey to an autism diagnosis has given her an insight and an empathy for the character that will no doubt shine through to readers. Kay Kerr (above) and fellow autistic writer Clem Bastow exchanged “letters” (emails) to celebrate the book’s release and discuss writing while autistic.

Clem: When did you decide to write from the perspective of someone with a “limited edition” brain? (I love that line!)

Kay: Well, when I started writing Please Don’t Hug MeI didn’t realise I was writing an autistic character. Right from the first moment Erin was this strong voice that came very easily and I wanted to see where she took me. I figured she was socially anxious and awkward, but other things were ending up on the page as well, things I didn’t necessarily understand or see any correlation between. I just knew she was trying to deconstruct social interactions and figure out how she had managed to mess them up, or why she found certain things so hard when other people seemed to find them easy. It was only when I received my own autism diagnosis and had some time away to process it, I realised that was what was going on with my protagonist as well. I didn’t have to go back to the manuscript and make her ‘more autistic’, I just needed the language and framework to understand her a little better. Once I knew that key piece of information about myself and subsequently, about Erin, I was more fully able to see the story for what it was and it really took shape.

Isn’t it interesting that we often ‘write our way’ to a diagnosis? It was my own screenwriting practice that led me to seek clarity about my own possible place on the autism spectrum; at what point did you start to wonder about yourself?

That’s really interesting! I think writing has always allowed me to reflect on why people (myself included) act the way they do. Long before I was contemplating what an autism diagnosis might mean, I was using it as a way to make sense of things through stories, letters and journals. And while my diagnosis did not come as a direct result of writing this book, writing this book definitely helped me to process my diagnosis. Once I knew it, it was the most obvious thing in the world to me. And I still have memories pop up that make me go ‘ahhh, of course’, or traits that I find out are linked to being autistic that I hadn’t realised before.

You say that your diagnosis helped form a “key” to understanding both your own experience and Erin’s. How did the subsequent draft of the book change or develop from that point?

I think my diagnosis contextualized things in my own life, and gave me a clearer perspective on why Erin was acting the way she was throughout the story. It gave me more empathy towards her. I internalised so much shame in my own teenage years about not getting things right, or the things I found hard, and I projected that on to Erin as I wrote her. But once I was able to understand and forgive myself, I was able to move forward with subsequent drafts with kinder eyes. I fell more in love with Erin and got to bring out the funny, earnest, good-hearted parts of her more. It gave me a fuller view of the character and I was able to really flesh her and the narrative out a lot more.

What led you to write Please Don’t Hug Me as an epistolary novel?

It initially started as diary entries, and then morphed into the letters to her brother, but I think it was always epistolary form because that put some distance between Erin and the sensory and social interactions that made up her days. It gave her the space to figure out the hows and whys of things and think them through, rather than having the reader judging her based on how she reacted in the moment. It wasn’t a conscious choice to write in this form, but I can’t imagine this story any other way, to be honest. Erin is going through and processing so much in the book, and this felt like the best way to follow her along on that journey, as well as to give the reader an understanding of how that might feel for her and what’s going on inside her head.

I related to so much of Erin’s journey, particularly figuring out how to interact with peers. When I was younger I sometimes felt like the protagonists of YA books seemed so assured and confident in ways I couldn’t connect with; was it important for you to write from a perspective of a character who doesn’t necessarily have it all figured out from page 1?

I am sure there are plenty of young people who are more assured or confident, but that certainly wasn’t my experience as a teenager. I cared so much about fitting in, and flying under the radar, so I wanted to reflect that kind of experience. I think masking is such a big thing that autistic people, and specific to this story, young people, deal with, that relates to interactions with peers. For people on the outside of that it would look like nothing, because that’s the point, but to be living it takes a big toll. Erin is trying to figure out which parts of her personality truly belong to her, and which parts are there because she has absorbed them as the neurotypical ideal, and this is very true of my own experience as well. She moves towards a greater understanding of that by the end, but I think it will be a much longer and constantly evolving process for her.

One of the issues a lot of autistic women and gender diverse people face is a lack of representation in popular media, because that’s where many people develop their understanding of autism. Do you think having a YA character like Erin might have helped you to better understand your place in the world when you were younger?

Sometimes I think it would have. I like to think it would have anyway. But then I think what I actually would have needed and responded to would have been the wider understanding and perspective around autism that we are starting to see now, rather than just one book. My perception of what being autistic meant was very limited as a young person, and I was so stuck on wanting to fit in and be ‘normal’, that it is possible I would have rejected the idea or the diagnosis completely at that stage. I had my own journey of self-learning and awareness I needed to go on within the context of the time and place I was living. I am so hopeful and optimistic for young people now, who get to tell their own stories and carve out their own lives in a different way and a different world. There is obviously a long way to go in terms of challenging ableism and changing the way people think and talk about neurodiversity, but I like to think things are moving in the right direction. It’s incredible that young people have autistic people like Greta Thunberg and Dara McAnulty to look up to.

Can you take us through your creative process? Do you start with an outline and notes, or dive in the deep end and let your characters guide you?

For someone who loves order and lists and everything to have its place, my creative process is a mess. I’m trying to create some kind of method for my current project, but for Please Don’t Hug Me it was all word vomit and then trying to reverse-engineer a narrative arc from the mess I’d created. I love writing the emotional moments, and diving deep into those. The plot, not so much. I keep a notebook for each project, and fill it with lines of character description, or thoughts from the protagonist’s voice, or other random bits and pieces. It could be as simple as ‘story needs a driving scene’ or ‘she likes The Sims’. (Two notes for my current manuscript.) I read over these as I’m writing and editing and try to weave them through the work. But in my heart, I’m a complete pantser, as in, I start writing and see where the characters take me. I’m more of a voice-driven writer, so it’s likely I will need to focus more on plotting in edits.

What’s the one piece of advice you’d like to give fellow autistic people who are thinking about writing a book?

Do it! No, I should probably think of something more helpful than that, but I am so excited at the idea of more autistic own voices books existing in the world. I want there to be so many I can’t possibly get around to reading them all. My advice would be to read widely in the genre and readership you are hoping to write in. There is so much to be learned from what exists, and part of that is reading and finding the gaps on the shelves where your story should be.

You can pick up a copy of Please Don’t Hug Me from your favourite bookstore.