TV viewers know her as The Governess, a formidable figure capable of reducing people to quivering wrecks with her icy stare.
Away from the camera, a very different Anne Hegerty emerges.
The star of TV quiz show The Chase is deeply passionate about an issue requiring immediate, sustained attention.
Hegerty is well aware of the need for understanding and acknowledgement of autistic women and girls _ how it presents, the specific nature of autism in girls and their unique challenges _ because it took her so long to achieve her own diagnosis.
She has recently opened up about the challenges she has faced on the dating scene.
Anne was diagnosed with Asperger’s in 2005, at the age of 47, having watched a TV show about autism and recognised her own behaviour in some of the subjects.

During an interview on ‘Loose Women’, Anne revealed that she’d found relationships difficult because she struggled to read people’s reactions.
She said: “I was failing to pick up signals from people. I would think, ‘I really like this guy but he doesn’t seem to be interested’.
“It was literally years later that I would think about it and think, ‘actually that was him indicating his interest’.”

Anne is currently single, but told the Loose Women panel that she is happy that way because she “really does like her own space”.

She is also about to branch out on her own as presenter of the new series, Britain’s Brightest Family. 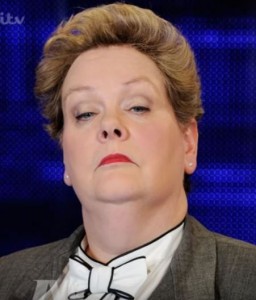 Through childhood Hegerty believed she’d have to live with her mother until she died and would then become a bag lady because she had no faith in her ability to cope.
By 13 Hegerty was considered “maladjusted”, sent to a boarding school under special needs legislation, and worked her way from bottom to the top of the class.
The world of employment, however, threw a whole new set of challenges in her direction.
The North Londoner, who is a journalist and former book editor, had problems multi-tasking and ended up losing her job as a proof reader.
It left her with major financial problems, unable to pay her bills, and bailiffs knocking on her door.
Her world began to make sense to her in 2003, when she saw a TV show about autism and realised she had many things in common with the show’s participants. She began researching autism and thought, ‘that’s it”!
It then took Hegerty two long years to get a diagnosis.
A social worker eventually helped Hegerty get her financial affairs in order and assisted in getting her to audition for The Chase.
Following are some observations Hegerty made in an interview with Success Circuit:
Her 2005 diagnosis
“I finally got my diagnosis from a woman who specialised in intellectually disabled kids, and when I turned up the receptionist said, ‘Are you here with Anne?’ I had to explain that I was Anne. She assumed I was going to be non-verbal or something.
“I don’t mind talking about (autism). I like to get rid of some of the misunderstandings about it. It affects me in various ways. It helps with the quizzing, because I can get very deeply obsessed with something and amass a ton of information about it. This morning I took a 12-question test on Star Trek Deep Space Nine, and got 11 of them right. That sort of thing.
“But it makes it difficult to multi-task , I can’t easily move my attention from one thing to another, that takes time. And I’ve worked out that I need to ration social contact. It’s nice to be invited to parties, and I appreciate it, but if I stay more than a short time, I either have to spend hours at home decompressing, or I’ll go straight to bed and then have violent nightmares.”
How she retains information
“I’ve always had quite a ‘sticky’ sort of memory. I’ll use mnemonics and word association. I had my flat done up last year, and to make the shower water colder I have to push the control away from me. I remember this because the Beer Hall ‘Putsch’ was in Germany which is a ‘cold’ country”!
Her biggest life challenge
I’m sort of awed that I’m finally making serious money. It was difficult for a long time to juggle being a book editor and actually, you know, living – getting showered and dressed and paying bills. I’ve actually got a home I can invite people to because bits aren’t falling off it. I never thought the mortgage would be paid off. It makes one feel like a grown up!
The birth of The Governess
“Originally I was gonna be called The Headmistress and during rehearsals Brad (producer) started referring to me as The Governess. I said to the producers, ‘Could I be that instead?’ I think what I said to them was that it’s more kinky”.

Dr Lori Ernsperger, a US expert on autism in girls and women, says, “Obtaining an ASD diagnosis for a female can be very challenging, with scant research and available answers from professionals.

Dr Ernsperger (PhD, BCBA-D) adds, “Females with ASD should not be expected to ‘fit’ within the narrow guidelines of a male dominated diagnosis. Over the last decade, professionals are beginning to identify general characteristics of females with ASD”.
Girls are more adept at camouflaging or “masking” autism than boys, and copying the behaviour of their peers to fit in.